I needed to satisfy my snack attack so I made this vegan chili cheese cheerios snack mix. Furthermore I wanted to make this vegan since I wanted to share this with my partner. Since I have a box of vegan cheerios style cereal that was my first step. Because the brand “Cheerios” uses vitamin D3 from a non vegan source. But if you have a regular box of Cheerios on hand and you don’t want to make this recipe vegan than go for it.

Additionally if you don’t need to make this snack mix vegan you can use parmesan or powdered cheese in place of the nutritional yeast. In other words this cheerios snack mix is really versatile. Because you can substitute some ingredients and add in what you have in your pantry. That’s why I love pantry recipes; use your own kitchen as a grocery store for this vegan chili cheese cheerios snack mix!

Easy to find ingredients in this snack mix 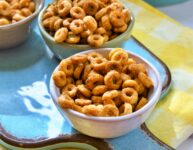 This simple easy to make snack mix only has a handful ingredients with bold Mexican flavors.

Welcome to
Recipe for a Party

Hi, I’m Joseph! I create simple, delicious recipes for parties that you and your guests will love. Life is a Party, so celebrate!

Don’t Miss a recipe!
Subscribe to new posts via email